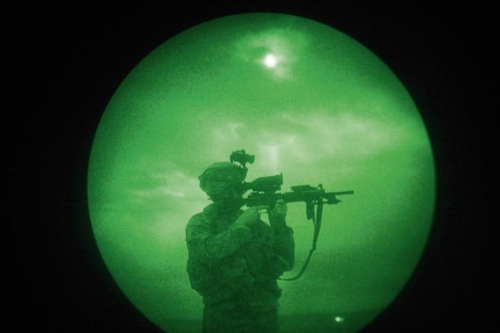 The experiment tested meditation against exposure therapy, which involves working with a therapist and gradually letting go of fears triggered by painful memories.

Many vets won’t try exposure therapy or drop out because it’s too difficult, said Thomas Rutledge, the study’s senior author and a Veterans Affairs psychologist in San Diego.

Evidence for meditation “allows us to put more options on the table” with confidence they work, Rutledge said.

The study was published Thursday in the journal Lancet Psychiatry.

About 400,000 veterans had a PTSD diagnosis in 2013, according to the VA health system. The VA already is using meditation, yoga and similar approaches to supplement traditional therapy with PTSD, said Paula Schnurr, executive director of the VA’s National Center for PTSD.

“There’s no follow-up in this study,” Schnurr noted, and one therapist did 80 percent of the exposure therapy so the findings hinge largely on one therapist’s skills.

Researchers measured symptoms in about 200 San Diego area veterans randomly assigned to one of three groups. Some learned to meditate. Others got exposure therapy. The third group attended classes where they learned about nutrition and exercise.

All sessions were once a week for 90 minutes.

The researchers defined success as at least a 10-point improvement in scores on a standard symptoms test, given to participants by people who did not know which kind of treatment they’d received. The test measures symptoms such as flashbacks, nightmares and insomnia.

PTSD also can be treated with medications or other types of talk therapy. Many of the participants were taking prescribed medicine for PTSD.

Most of the vets were men with combat-related trauma, so it’s not clear whether meditation would be equally effective in women or with other types of trauma.

There’s growing interest in meditation in the United States. A government survey last year found 14 percent of adults said they had recently meditated, up from 4 percent from a similar survey five years earlier.

There are many styles of meditation. The type taught to vets in the study was transcendental meditation, or TM, which involves thinking of a mantra or sound to settle the mind.

TM was developed by Maharishi Mahesh Yogi, a guru to the Beatles in the late 1960s. Some of the study authors are affiliated with a university in Fairfield, Iowa, founded by Maharishi. Their role was to oversee the meditation training.

Rutledge, who was the principal researcher, said he does not practice meditation himself.

Meditation could be more acceptable to veterans who might associate mental health treatment with weakness, Rutledge said.

“It’s probably less threatening,” he said. “It may be easier to talk to veterans about participating in something like meditation.”

More in this category: « Tuning your Body to the Earth's Frequency: 9.6hz Thoughts on "Acute Flaccid Myelitis" »
back to top
More Inspirational Quotes