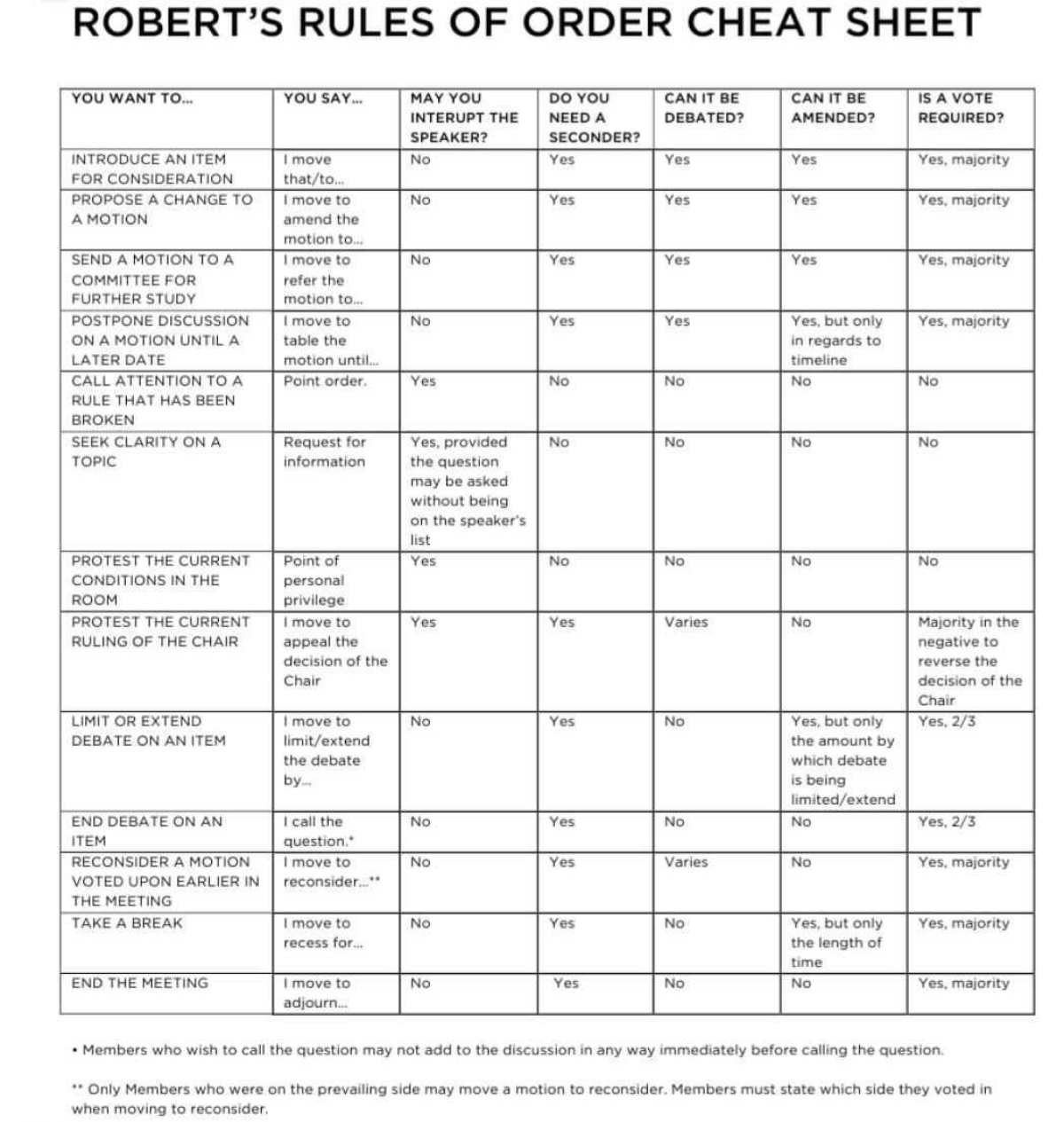 Scroll down for the attachments and charts

What Is Parliamentary Procedure?
It is a set of rules for conduct at meetings that allows everyone to be heard and to make decisions without confusion.

Why is Parliamentary Procedure Important?
It's a time-tested method of conducting business at meetings and public gatherings. It can be adapted to fit the needs of any organization.
Organizations using parliamentary procedure usually follow a fixed order of business.

Below is a typical example agenda:

The method used by members to express themselves is in the form of moving motions. A motion is a proposal that the entire membership act upon (or take an action) or a stand on an issue.

There are four Basic Types of Motions:

How are Motions Presented?

Voting on a Motion

The method of vote on any motion depends on the situation and the by-laws of policy of your organization. There are five methods used to vote by most organizations, they are:

There are two other motions that are commonly used that relate to voting:

Be sure to understand the difference!  See FAQ #12

Parliamentary Procedure – is the best way to get things done at your meetings.

But it will only work if you use it properly.

Most importantly, BE COURTEOUS. For Fair and Orderly Meetings & Conventions Provides common rules and procedures for deliberation and debate in order to place the whole membership on the same footing and speaking the same language. The conduct of ALL business is controlled by the general will of the whole membership - the right of the deliberate majority to decide. Complementary is the right of at least a strong minority to require the majority to be deliberate - to act according to its considered judgment AFTER a full and fair "working through" of the issues involved.

Robert's Rules provides for constructive and democratic meetings, to help, not hinder, the business of the assembly. Under no circumstances should "undue strictness" be allowed to intimidate members or limit full participation. The fundamental right of deliberative assemblies requires all questions to be thoroughly discussed before acting!

The assembly rules - they have the final say on everything!

Obtain the floor (the right to speak) by being the first to stand when the person speaking has finished; state Mr/Madam Chairperson.

Raising your hand means nothing and standing while another has the floor is out of order!

Must be recognized by the Chair before speaking!

Debate cannot begin until the Chair has stated the motion or resolution and asked, "are you ready for the question?"

If no one rises, the chair calls for the vote!

Motion/Resolution - Amendment - Motion to Postpone · The member moving the "immediately pending question" is entitled to preference to the floor!

No member can speak twice to the same issue until everyone else wishing to speak has spoken to it once!

All remarks must be directed to the Chair.

Remarks must be courteous in language - avoid all personalities, never allude to others by name or to motives!

View the embedded image gallery online at:
https://www.natecovington.com/politics/robert-s-rules-cheat-sheets-and-guides#sigProId1866c0c4c2
More in this category: « CRM Solutions for Political Candidates
back to top
More Inspirational Quotes