In mid-2018, there were a series of resignations and appointments for the Auditor position in my township. First in May (link), then again in October (link).

Watching this transpire, I decided to throw my hat in the ring:

October 16, 2018
To the Supervisors:
By way of this letter, I am hereby expressing my interest in the open auditor position.
Thank you for your consideration.
Sincerely,
Nathan Covington

I was first appointed October 24, 2018 by the Township Board of Supervisors.

Township Secretary attempts to strip me of my first amendment right to free speech, citing an imaginary "code of ethics" that applies to elected / appointed officials. (!?) 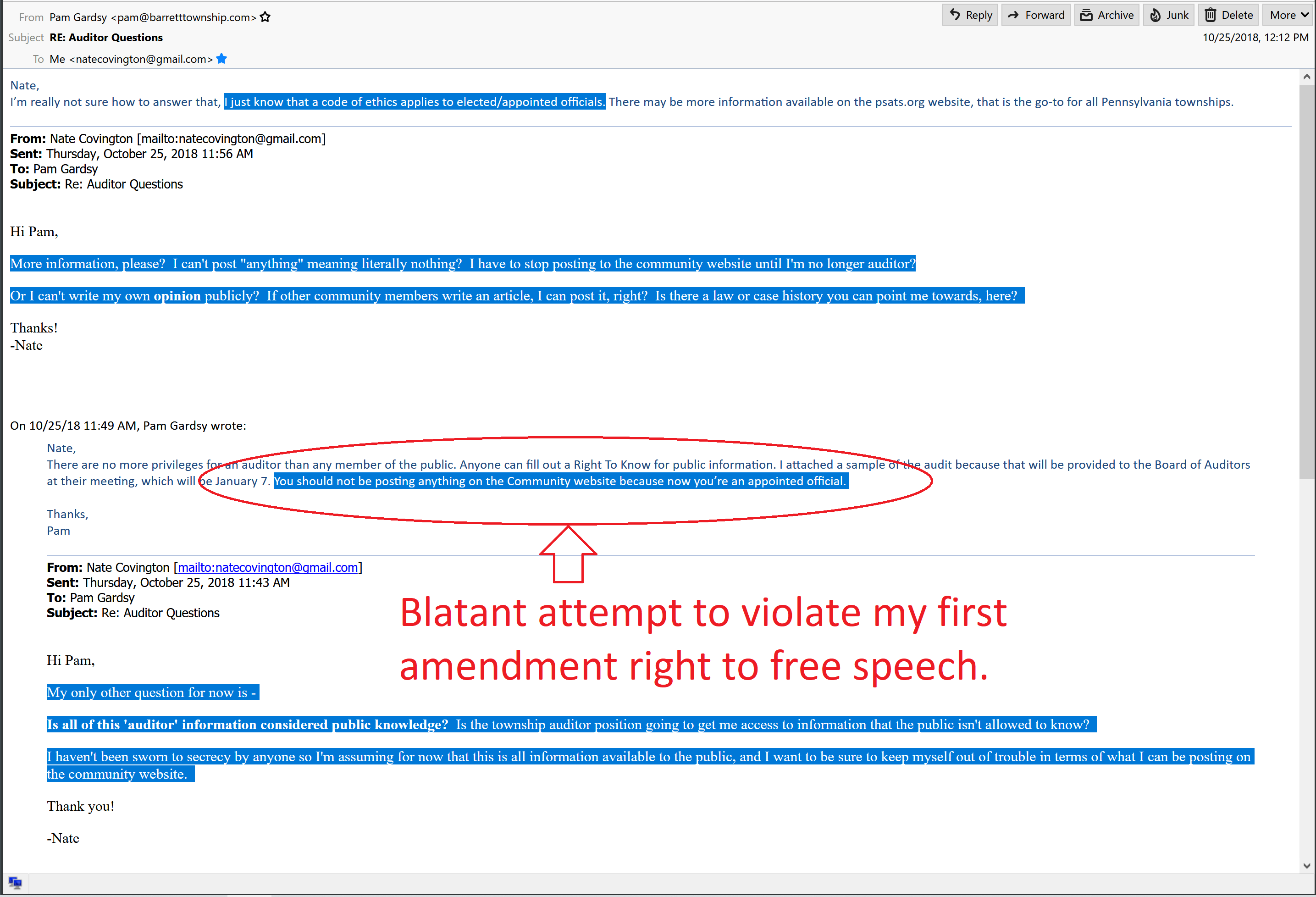 For the next few months, I researched. I filed a few "Right to Know" requests. I started researching the township's financial statements.

In January 2019, the auditors held their only meeting of the year.
Pam, the township secretary, later said that she "believes" I need to be sworn in and she would "get back to me" - but she never did.

When it came time for the meeting, Pam was in attendance, quick to inform me I was technically unable to participate because I never got sworn-in! How embarrassing! My fault, I suppose. I went to the local magistrate to be sworn-in the following morning.

February 2019, I got back on my horse.
I began writing about what I learned and shared the articles with fellow neighbors, voters, taxpayers:

March 2019, I discovered my Township Supervisors had wildly misquoted me at a public meeting 9 years prior.

The gloves came off.

I dug directly into their financial statements and clearly demonstrated a lack of transparency when comparing with other townships' records:

December 2019
The people like it! In the November election, I wasn't on the ballot, instead ran as a write-in.  I think I had around 20 total write-in votes and 14 were officially counted because some people wrote me in as supervisor, or the 4 year auditor position.  Regardless, I was elected for 6 more years:

January 2020 -
Auditor's annual meeting - this time I was sworn in and able to participate. I was also nominated as chairman of the board of auditors. I'm honored!

As auditor, I am committed to transparency and disclosure, something that Barrett Township has been lacking for some time.

Last modified on Sunday, 19 April 2020 10:28
Published in Politics
More in this category: « "A Time for Choosing" by Ronald Reagan Coronavirus Shutdown Exposes US Dollar Decline »
back to top
More Inspirational Quotes