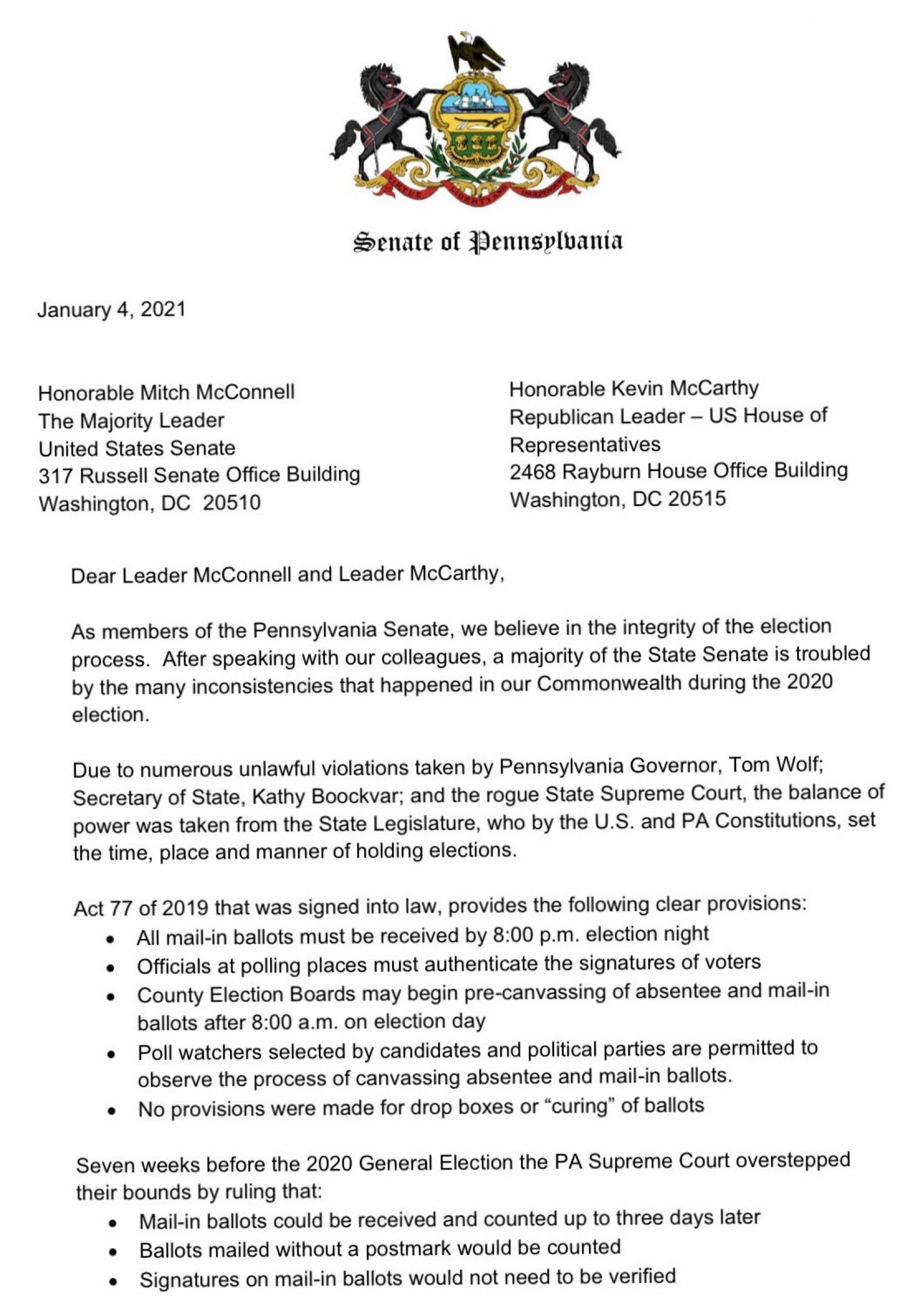 As members of the Pennsylvania Senate, we believe in the integrity of the election process. After speaking with our colleagues, a majority of the State Senate is troubled by the many inconsistencies that happened in our Commonwealth during the 2020 election. Due to numerous unlawful violations taken by Pennsylvania Governor, Tom Wolf; Secretary of State, Kathy Boockvar; and the rogue State Supreme Court, the balance of power was taken from the State Legislature, who by the U.S. and PA Constitutions, set the time, place and manner of holding elections.

Act 77 of 2019 that was signed into law, provides the following clear provisions:

• All mail-in ballots must be received by 8:00 p.m. election night

• Officials at polling places must authenticate the signatures of voters

• County Election Boards may begin pre-canvassing of absentee and mail-in ballots after 8:00 a.m. on election day

• Poll watchers selected by candidates and political parties are permitted to observe the process of canvassing absentee and mail-in ballots.

• No provisions were made for drop boxes or "curing" of ballots

Seven weeks before the 2020 General Election the PA Supreme Court overstepped their bounds by ruling that:

• Ballots mailed without a postmark would be counted

• Signatures on mail-in ballots would not need to be verified

• On the day before the election, encouraged some counties (not all) to notify party and candidate representatives of mail-in voters whose ballots contained disqualifying defects and allowing them to "cure" these defects

In addition to these inconsistencies, certified Republican poll watchers in Philadelphia were prohibited from overseeing the canvassing of ballots. After a court ordered these

poll watchers to be allowed to observe, they were "corralled" so far from the canvassing of ballots, that they could not view the activities.

Requests from legislators for independent investigations have been ignored by the administration.

Due to these inconsistent and questionable activities, we believe that PA election results should not have been certified by our Secretary of State.

Members, we ask for more time given the fact that the U.S. Supreme Court is to hear Trump vs. Boockvar in the coming days. We ask that you delay certification of the Electoral College to allow due process as we pursue election integrity in our Commonwealth.

Members of the PA Senate

Pennsylvania Secretary Of State Kathy Boockvar Leaving Wolf Administration After Failure To Advertise Constitutional Amendment Gov.
Tom Wolf says the change has nothing to do with the 2020 election, "which was fair and accurate."

There are no comments posted here yet