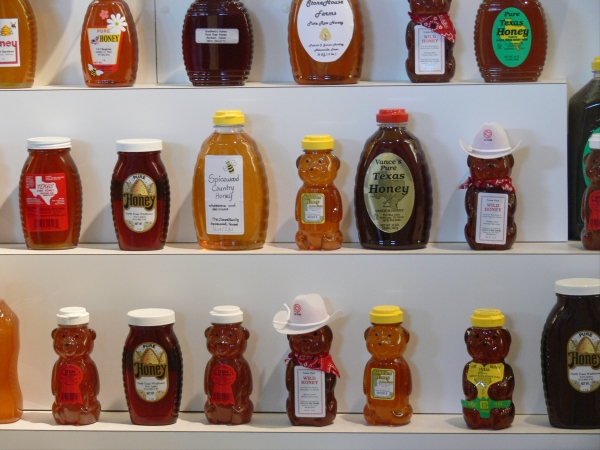 I’ve suffered from seasonal allergies for over 15 years. When I was a teenager, I had prescription-strength nasal spray, eye drops, and pills (Zyrtec, Claritin, Allegra). All of these were somewhat helpful in addressing the symptoms I encountered: sneezing, itchy, puffy, watery eyes. When it got bad, I would rub my eyes so much that they would swell shut.

A few years ago I started paying attention to eating healthy foods (non-GMO, organic, that sort of thing) and one of the topics that came up was that of eating local, raw honey to combat seasonal allergies.

I also learned that one of the main ingredients in the prescription-strength Claritin was Pseudoephedrine, a chemical that does help with sinus congestion, it also increases your heart rate and blood pressure. Side effects for this drug include chest pain, very fast, pounding, or irregular heartbeat.

Local, raw honey also has antibacterial properties (good for treating colds, sore throats) and it stores for a very long time (some folks say it lasts forever if stored properly).

The concept for using raw honey to treat seasonal allergies is that you are giving yourself a direct injection of pollen. It’s important to use local raw honey, so that the pollens that are in the honey match up with the pollens that cause the allergic irritations.

My first year with using the local raw honey was that I bought a half-gallon container of it, and started eating a spoonful every few days, starting in February.  I wound up only using my Claritin a few times that year (2013), so I considered the honey treatment to be a success. I would normally take the Claritin daily for a month or two, but I only needed to take it 3 or 4 times, on really bad days.

My second year was not so well-planned.  Instead of starting in February, I waited until March and on day one, I ate 4 spoonfuls. What a mistake! Within minutes, my nose was running like a faucet, and I was generally miserable. Much like the actual allergies. A day or so later, I was back to normal, and I continued eating a spoonful of the honey every few days.  I did not need any Claritin at all in 2014.

Fast forward to this year (2015) and I felt allergy season starting (along with the buds on the trees), so I took my first spoonful of honey. Once again, my nose started running like a faucet. Miserable! That told me that once again, the pollen in the honey matched with what I’m allergic to in my environment. A day or three later, the runny nose subsided, and I started eating a spoonful of honey every few days. I’ve been doing this for a few weeks now, which is part of the reason for my post.

I’d like to think that I get a little bit smarter every year. For the remainder of this year, and throughout next winter (early 2016), my intention is to continue eating the local raw honey every few days, so that my system doesn’t get shocked when allergy season 2016 comes around. I’ll already have the pollen tolerance built up in my body.

Bottom line - I'd much rather give my money to a local farmer than a pharmaceutical corporation.

Is anyone else using local raw honey to treat your allergies? I’d love to gather more feedback about this in the comments below.

Disclaimer: This is not, and it is not intended to be, medical advice. Please consult with your doctor before changing lifestyle or medications.